Here’s a simple little test that teaches an important lesson. Take a moment to work through all 3 questions. I promise it won’t take long. :-)

Question 1. A flood is coming. George can only swim for a little while. What should George do?

Question 2. A flood is coming. George can only swim for a little while. What should George do?

Question 3. A flood is coming. George can only swim for a little while. What should George do? 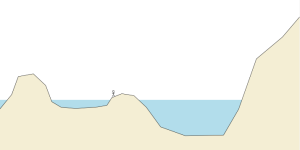 Ready to grade your answers?

Most people say “go right, toward higher ground” if picture 1 is the only input to their analysis. The logic is pretty indisputable. But…

One of the disturbing lessons of my MBA was that many–perhaps the vast majority–of publicly traded companies operate at the level of insight provided by picture 1. Last quarter they had EPS of 0.27 USD; this quarter they have to do better to keep the stock price up, so they move to higher ground by redoubling their efforts to cut costs, improving their marketing, and adding new features.

The problem with this approach is that it’s short-sighted. Leaders that insist on incremental improvement without exception are bound to find themselves, sooner or later, on a low island with the water rising. As Kent Beck recently pointed out, sometimes you have to wade into the water to get to higher ground.

Have you ever worked on a product team that can’t think beyond the current crisis? That’s picture 1 thinking.

But that’s not the end of the story, either.

You see, many types of strategy require you to take calculated risks, and those risks have probability curves that vary over time. To help George, you have to hold all three analyses of his situation in your mind at the same time, and assess the likelihood that George will be able to swim across a channel in time, against the likelihood that water level will rise past certain key points. If I told you that George can’t climb steep hills, then maybe going right in picture 3 isn’t so smart after all…

It’s not an exact science. Smart CEOs and software architects and investors and product managers and QA leads all get this. They consider the implications of their choices from multiple perspectives, make the best bets they can, and drive risk out of their decisions whenever they can find a way to do so. And often, they make better decisions than those who operate only at the level of a single picture.

If you said “it depends,” then give yourself a star on the forehead. My friend and mentor Steve Tolman would be proud of you. If you said, “C’mon, Daniel, you’ve got to tell me how bad the flood will be, when it’s going to arrive, how long it will last, and whether George has the materials and skills to build a boat,” then you get two stars, because you’re asking specific questions.

It really does depend, and I have not given you enough information. You could make some reasonable assumptions, but if you can get hard data, so much the better.

Smart black belts don’t just notice that these questions need answering–they proactively attack them. I would prefer to fight the competing hordes with a well organized team of black belts around me. Wouldn’t you?

If you said, “learn to swim” or “put on a life preserver” then you have captured truths that many forget. You’ve fully understood how, why, and on what the short-term answer depends, and you’ve taught it to less experienced students for years. Along the way, you’ve identified some core principles that always pay off. You want to be sure those core principles don’t get neglected, no matter which way the “it depends” pendulum ends up swinging in a particular circumstance.

How does your team operate most of the time? Are you evaluating the ramifications of your designs, processes, roadmaps, and other plans only by short-term payoff? Or do you think from many perspectives at once? Do you give proper weight to long-term? Do you have core principles that you tenaciously follow, because they’re tried-and-true? Do you have a plan to learn to swim?

Next time you have a controversial decision to make, listen to how the alternatives are evaluated. Give your team a virtual blue belt or black belt or whatever belt you’re wearing, and then consider how to improve.

2 thoughts on “George and the Flood”