In my previous three posts, I explained why the semantics of programming languages are not as rich as they could be. I pointed out some symptoms of that deficit, and then made recommendations about bridging the gap. Finally I introduced “marks”–a feature of the intent programming language I’m creating–and gave you a taste for how they work.

In this post, I’m going to offer more examples, so you see the breadth of their application.

Before I do, however, I can’t resist commenting a bit on the rationale for the name “marks”.

In linguistics, markedness is the idea that some values in a language’s conceptual or structural systems should be assumed, while others must be denoted explicitly through morphology, prosodics, structural adjustments, and so forth. Choices about markedness are inseparable from worldview and from imputed meaning. Two quick examples:

In all human language, meaning is powerfully influenced by patterns of markedness. We pay attention to marks. Whether we’re raising our eyebrows, selecting words with care during an debate, or straining to understand a friend on an iffy cell phone connection, we key off of their presence or absence. We do it intuitively and constantly.

Yet for all their power, marks are unobtrusive and cheap to use.

Of course, markedness already manifests in programming languages, even if you’re not using my “marks”. Depending on whether you’re in java, C++, or python, the default visibility of class members is package, private, or public–all other visibilities must be marked. Constness is marked in C++. Alignment of data structures, casting, partial template specialization, scope of closure variables, and many other features all embody markedness rules in one way or another.

Unfortunately, the literalness of programming languages, and the fundamental assumption that the purpose of a language is exactly and only to embody instructions that get translated to machine code, has caused markedness to be mismanaged. I’ve already written at length about the semantic gap between code and human software development activities–the lacuna humana. That arises partly because of markedness problems; go back and read my blueprint for marks and see how markedness can’t propagate or evaluate without the infrastructure I describe.

Another consequence of markedness mismanagement is clumsiness and verbosity. Human languages are parsimonious; default cases tend not to be the marked ones. Even when marks do appear, they propagate meaning without ad nauseum repetition. But programming languages have historical baggage that flips markedness on its head–the threadsafe, bounds-checking, non-blocking, const-correct versions of features that we should use by default all require extra marks. Think sprintf_s, rand_r, the std:: namespace… Think smart pointers versus raw pointers. Think Hoare’s billion-dollar mistake. How many explicit assertions and preconditions have you written over the years, to sanity-check stuff that should always be true (if (myArg == null) throw Exception("Can't be null.")…), instead of writing code to allow a few corner cases?

Hopefully I’ve convinced you that markedness matters. I think it’s a mountain, rather than a molehill. 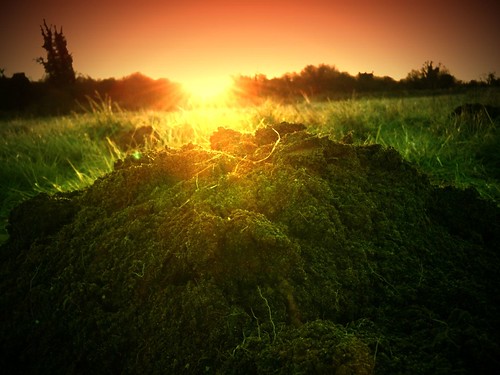 A mole hill with a glorious horizon behind it. Are those mountains, or just trees? :-) Image credit: Strep72 (Flickr).

But just in case I haven’t, here are more scenarios to think about. As you read these, keep in mind what you already know about marks: they have full access to the code DOM at compile time; they propagate in sophisticated ways; they can generate code; and they can attach to constructs that traditional code ignores, such as requirements, human teams, and so forth.

This post would be incomplete if I didn’t acknowledge the limitations of marks. My friend Trev Harmon (@trev_harmon) was asking me the other day how much I thought my ideas overlapped with the goals of the semantic web. Marks are not nearly that ambitious. Although they expand the scope of semantics in programming languages in important ways, they can’t turn code into a fitting conveyance for all human communication. They work well within the domain-specific language of software development.

Another of my friends, David Handy, pointed out that propagation of marks through a call graph gets problematic across closure boundaries and function pointers. That’s quite true, and I’m not sure how surmountable it is.

So marks can’t butter your toast, or write poetry. :-)

Still, I think they’re a useful innovation. I’m hoping that smarter minds than mine can pick up on the kernel of the idea and take it to cool new places I haven’t yet imagined. My friend David also pointed out some cool ways that marks could be used to gather statistics, which I had not considered. What else will you dream up? If you’re interested in collaborating, let me know. Also, I would appreciate you sharing this series of posts with people who don’t read my blog; I’m interested in broadening the conversation as much as possible.

8 thoughts on “Mountains, Molehills, and Markedness”