A couple years ago, I wrote about signing the Agile Manifesto and the Manifesto for Software Craftsmanship.

Today I want to write about something a lot more important.

Let me use résumés to provide some context.

I used to think that the “Objective” section of a résumé was fluff–a place to dump vague platitudes, maybe. You know the stuff I’m talking about:

Objective: Craft high-quality, enterprise software in an environment where I can make significant contributions to the bottom line of a growing company.

Theoretically, this stuff helps you get jobs, but as someone who writes a lot, my drivel-o-meter pegs at such verbiage. Usually, it means about as much as the Business Buzzwords Generator recently posted by the Wall Street Journal. 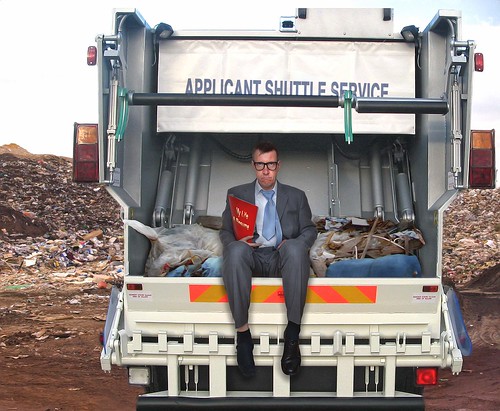 But it doesn’t have to be that way.

Your objectives ought to matter.

END_OF_DOCUMENT_TOKEN_TO_BE_REPLACED

The other day I was on Gene Hughson’s blog (he’s a smart guy, btw; I recommend a visit), and I noticed a badge that said that he had signed “The Oath of Non-Allegiance.”

That piqued my curiosity.

I followed Gene’s link and ended up on Alistair Cockburn’s website. Alistair is one of the early torchbearers for the agile software movement. I’ve written previously about signing the Agile manifesto, so I felt like I was swimming in friendly waters.

The oath is about being open-minded and pragmatic:

I promise not to exclude from consideration any idea based on its source, but to consider ideas across schools and heritages in order to find the ones that best suit the current situation.

In other words, let’s examine ideas on their merit, rather than dismissing them because they don’t align with the programming or process or architecture or platform buzzword du jour.

However, the oath got me thinking a bit, and I want to register two notes of caution.

Caution 1: It is possible to be too pragmatic.

On the continuum that has “ivory-tower idealism” at one end, and “pragmatism” at the other, I’m well past center, favoring the pragmatic side. However, we should not discount the value of idealism. It was pragmatists who found enough compromise to ratify a constitution that made a loose confederacy into the United States of America–but it was the firebrand idealism of folks like Thomas Paine that articulated a vision, inspired a previously fragmented public, and provided the heat to carry the revolution through its darkest winters.

I have seen architects that are way too ivory-tower. They make recommendations based on their favorite patterns and methodologies, with little regard for practical consequences. Smart engineers quickly dismiss them as being out of touch and irrelevant, and they are right to do so.

On the other hand, I have seen “architects” who, despite deep talent as engineers, are forever in the mode of “whatever gets the job done” and “if it ain’t broke, don’t fix it.” I believe this view is short-sighted; it loses touch with the opportunity cost of sub-optimal decisions, and with the human passion that keeps architectures healthy. Codebases owned by this type of “architect” tend to be rife with tech debt, with no roadmap or process to haul the team up and out. Where there is no vision, the people perish.

Caution 2: Pragmatism must be earned.

Before you can be a pragmatist, you have to understand what’s possible, what’s good and bad about each alternative, and why certain considerations might trump others given a certain business context and time horizon. This perspective doesn’t come cheap; it’s been my experience that only the school of hard knocks teaches these classes, and the tuition is expensive.

I mistrust anyone who lightly dismisses OO or message passing or actors or whatever the technique is, on the basis of shallow prejudice–but I also mistrust anyone who picks and chooses from the smorgasbord based purely on convenience of the moment. As Oliver Wendell Holmes said, “I would not give a fig for the simplicity this side of complexity, but I would give my life for the simplicity on the other side of complexity.” Unless you truly wrestle with the complexity, pragmatism can degenerate into cheating and chaos. Or said another way: only seasoned idealists earn the right to be pragmatists.

Consider where you fall on the idealism~pragmatism continuum. Advocate the opposite end of the spectrum with yourself in a mental debate; do you have anything to learn from those who position themselves differently?